Today marks the official release day of Road Salt and once again I am giving away the free eBook edition of Road Salt on Smashwords. I’m not doing this just in hopes of attracting reviews for the book. What I really want is to help create awareness of this dangerous substance that is still being sold on our streets, not just in the United States but all around the world. It was the main reason why I wrote this book to begin with.

Over the past year I have met many people that have never heard of the substance let alone know how dangerous it is, this goes for service workers as well. When I first set out to write this story I had to scour the internet in search of facts about the substance. I was hard pressed to find anything worthwhile. That was over a year ago. Then I got thinking and had an a-ha moment, which led to my next lead on the topic.

When I was in high school I did basic research but nothing to this degree. This time there was no information to be found in encyclopedias or libraries. Instead I had to find a new type of source.

At first I figured my informant would be a drug rehab counselor. I was wrong. They knew even less about the substance than I did. All they knew was that it existed and it was very bad stuff.

I thought well maybe I should ask a doctor, but then I said no. They are too busy to be bothered with such a thing.

Finally after searching and searching my brain went ding. I once worked with this guy who was an EMT. He is one of my friends on Facebook and still is an EMT. He even teaches the EMT course. So I said, what the heck, why not ask.

He was so excited to hear I was looking to write such a book that he gave me exactly what I was looking for. He too wanted to help bring about awareness of the substance since he saw the dangerous effects first hand when he responded to such a call. He has been to many a call involving the use of Bath Salts and he said it is not pretty.

So here it is for all to see and read: Road Salt

Free on Smashwords in many different eBook formats all DRM free… https://www.smashwords.com/books/view/258513 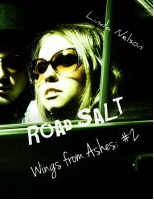 I hope everyone had a great Thanksgiving Holiday.

I know I did. This was the first year in a long time that my son has been home for the holiday. It was so good to have him here.

On Thanksgiving night we went out and did the unthinkable and went Black Friday Shopping. What an insane idea that was. I didn’t know that there could be that many people living in the area to fill a store up the way it was that night. I mean everyone was parked everywhere, on the grass, in the road, and up on the highway. Then there wasn’t one single shopping cart to be found in Walmart. People were sitting on them waiting for 10 o’clock to come around so they could turn in their tickets to get their TVs they were waiting for.

I only managed to find three out of nineteen items I had on my list. I should have printed out a map of the store before going. Then I would have known where everything was going to be. Maybe next year, even though Mike said there won’t be a next year. I guess he didn’t have a good time being my personal shopping cart. But he was a good trooper none the less.

This year I did not officially take part in NaNo WriMo. I was too busy struggling to get the first draft done for Road Salt.

So, I am happy to announce folks, the first draft is done. I made it to the end of the story. I even formatted the file for Smashwords and I think it passed the vetting process on its first time around. Now I have to begin the edit process. Hopefully I can have the first edit done by Christmas.

I did not make my end goal for word count on the first draft. One of the problems I have when I write is that I tend to write very tight, almost too tight. When I go back through the story I am sure I will be able to make my end goal after answering the same questions for each chapter.

If I can answer all the above I am sure that there won’t be too many gaps in the story. This is what I did when I did the last edit on Friends of Choice. Just by answering those questions I was able to add another 14k words to the manuscript.

If anyone is interested in being a beta reader for me and giving me some constructive criticism on Road Salt you can view the first draft on Smashwords for free… https://www.smashwords.com/books/view/258513

The more ideas I can get on this story the better. I do know that I need to delve deeper into my characters for this story. That will be what my main focus will be on while I do the first edit.

It really isn’t supposed to be an entertaining read, but if I could make it entertaining that would be all the better.