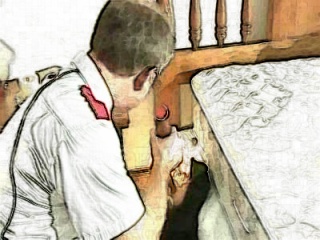 “I never would have purchased this house if I’d known that…” Howard said to his wife.

“Known what?” she asked.

“About this house being infested.” He replied.

“Is that what you think the problem is?” Lorna held up her arm to examine the rash. Red marks covered her right arm and she had more of them on her right leg.

They just moved into the house on Friday. After spending the past three days in it, both of them were now covered with some sort of strange rash. The rash was itchy.

Howard ripped the sheets off the bed to expose the mattress underneath. It was clean. He then lifted the bottom of the mattress seperating it from the box spring. A couple of small bugs crawled closer to the center of the mattress.

“What are they?” Lorna tried to peer closer, helping him lift the mattress higher.

“I don’t know, but look there is a mess of them there in the corner.” He pointed to the far corner which had slid off the box spring.

Small brown bugs which looked like small beetles clung to the corner of the mattress. Howard grabed a can of bug spray and squirted it on them. There was no sign of them being effected by the spray.

“How do we kill them?” Lorna grabbed a kleenex and wiped them off the corner. She missed a couple and they fell onto the floor beside the bed. They scurried away under the bed.

“I’m going to go call an exterminator and see what he says.”

Howard left the room. Lorna followed him into the den where he searched through the yellow pages, searching for local exterminators. He found a couple of them and called them.

He told the exterminators of their problem with the bugs and the rashes. He tried to describe the bugs as best as he could over the phone.

“But how can my mattress be infested like it is? We have only been living here for three days now.”

Lorna listened patiently to the one sided conversation. She began to wish they had never moved out of their home they had lived in for the past fourteen years. A bug problem, they never had a bug problem before.

“When can you come out and take care of this infestation?” Howard asked the exterminator. This was the third exterminator he called. So far they were all back logged with current clients with extermination issues.

“In two weeks? I will keep looking then. Thank you for your time.” He hung up the phone and called yet another exterminator.

This exterminator was also booked up for the next month.

“This is rediculous.” Howard sat down on the sofa in the living room. He had called about ten exterminators in the area and they were all backed up for the whole month. Apparently every one was having a problem with bed bugs.

“Oh my God!” Lorna said. She noticed a bug crawling on her leg while she sat back on the sofa with Howard. “They are every where!” She smacked the bug on her leg, squishing it dead.

She lifted the cushion to the sofa and there were several bugs underneath the cushion. Lorna looked around the room. There seemed to be no where they could sit in the living room with out risking being bitten by the bugs. They would not be able to sleep in their bed either.

“I can’t live like this,” she told her husband. He looked just as distraught as she felt.

“We should never have moved.” Lorna said angerly.

“Well we are not going to deal with this problem much longer. I will take advantage of the home owners insurance. They can pay to for the removal of the bugs from this home.”

“But the homeowners insurance does not cover for infestation.” Lorna stated.

“I know… That’s why tomorrow I’m setting it on fire.”